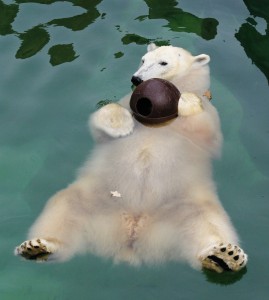 A hungry bear smells your freshly bought groceries five miles away. You’re not home so he lets himself in and helps himself to a pound of chocolate save for two or three pieces, 72 individually wrapped pieces of cheese and some butter.

What would you do if you saw a bear, twice your size, ravenously eating away your refrigerator?

“The bear roughly stood about 6’2, 6’3, had to weigh 400 or a little more pounds and when he stood up, it was definitely breath taking,” said Ron Hysell.

You’d probably run for the hills. Or at least I would.

“I was scared he was going to come after me,” said Hysell. After all, no one likes to be disturbed when they’re eating.

After spotting Hysell, the bear took off through the backdoor screen out toward the highway.

But Mr. Bear was still hungry.

“He ate the bread, another pound of cheese and yogurt and ate about 18-19 packages of that,” added Hysell.

And after two meals, you would imagine Mr. Bear felt pretty famished. So, he picked up a cold one and called it a day.

“I asked him (A Florida Fish and Wildlife officer) if a bear would drink beer and he said definitely! There is nothing funnier than a bear who has a little bit of alcohol in him.”

That’s not the only Naples bear sighting. Sometimes bears just want a nice, cozy place to curl up in for an hour or so. A 7-year-old boy found a bear taking a nap. After about an hour the bear got up and exited through the screen door.

See the ABC News video below:

And sometimes, according to this article, they just want to cool off and take a dip in the pool: