Many East Naples residents may have noticed the pending construction of a Culver’s restaurant near the intersection of Collier Boulevard and U.S. 41. Many of you may have also noticed the “coming soon” sign was recently taken down and a “for sale” sign was put up in its place.

The local franchisee for Culver’s is planning another Naples-area location, according to this article from the Naples Daily News, but not necessarily at that particular site on U.S. 41 East.

“(Franchisee Mike Busalacchi) is still committed to a restaurant in Naples, and looking at a couple sites in the area. Because of increased activity in development in the area, he wants to look at all options,” said Paul Pitas, director of public relations and communications for Culver Franchising System Inc. 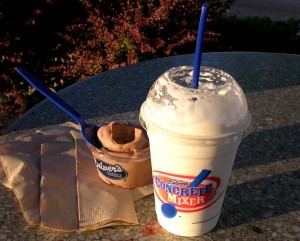 A contract still exists for Culver’s to purchase the East Naples property at 100 Price St. that formerly had the “coming soon” sign, said Jack Brugger, a Naples attorney who holds the property’s title for a man who lives in the United Kingdom.

“They are doing their due diligence. Nothing has changed at this point,” Brugger said.

Culver’s still has several months to do research and analysis to prep for a business transaction, he said, adding that a “for sale” sign has always been on that property across U.S. 41 East from where Outback Steakhouse is under construction in Lely Resort’s Triangle Plaza.

Busalacchi, however, could not be reached for comment—according to the Daily News article.

We want to know where you stand.

Were you excited to hear about the new restaurant? What would you order from there?