At this rate, Phil McCabe is going to take over Downtown Naples.

The Naples real estate giant plans another expansion of the Inn on Fifth, this time to the north, with a new hotel, the Naples Daily News says. The stand-alone hotel will tie into the Inn on Fifth Avenue, with the same branding, but will offer larger rooms spanning an average of 1,500 square feet, according to the article.

“I am building on Fourth Avenue,” McCabe said. “I’m blessed with a lot of land over there that needs to be redeveloped.”

Architectural drawings for the Inn on Fifth Residences and a site plan are in the works. But nothing has been filed with city staff.

“The whole project will be actually five-star,” McCabe said. “It’s a big investment — $30 million to $40 million.”

But if anyone can take on this monster project on Fifth Avenue—it’s McCabe. 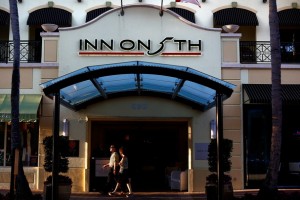 This photo of the Inn on Fifth on Fifth Avenue in Downtown Naples was taken from www.naplesnews.com

He plans about 95 rooms, with 65 built in the first phase, split between two or three buildings. Another building, to be added later west of Seventh Street, would have another 30 rooms.

The proposal must go through a number of parties before coming to fruition, but McCabe already has the support of Naples Major, John Sorey.

“Obviously, he’s a smart businessman and also he’s got the luck of the economy going with him,” the mayor said.

And others soon may follow McCabe’s lead. Several other sites downtown are possibilities for hotels, Sorey said.

“I’ve had multiple discussions with various people about four different sites that could be a great addition to downtown, and they are all talking about boutique kinds of hotels,” he said, declining to elaborate.

McCabe hopes to begin construction this summer. The residences would have their own front desk, fitness center, pool, game room, theater and restaurant, but guests also would have access to the amenities at the inn, including a spa.

Maybe McCabe hopes they will never want to leave. And why would they?

McCabe spent about $18 million on the multistory building and recently invested about $5 million on upgrades to the inn’s existing rooms and a new restaurant, Avenue5. Some, he said, might think he’s crazy.

“It’s working,” he said with a chuckle. “Financially, that is.”

He expects to open the new luxury hotel in two years.

“We do need that kind of multiple-room configuration,” Jack Wert, Collier County’s tourism director said. “That is very popular with our international visitors, especially ones traveling with families. That would be a nice addition to our hotel inventory.”